Upon completion of this course, you will be able to create a mobile application and deploy it to a device. You will also understand the role that developers play on an overall product team to prepare you for a transition into a work environment.

This course is not yet scheduled, but we can notify you when it is. 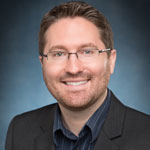 Aaron is a senior software developer at Walmart with 10 years of experience developing desktop, mobile and web applications. He has a bachelor's degree in computer science from Brigham Young University - Idaho. While working toward his degree, Aaron started an internet-based textbook rental business that he used to finance his education. Post-graduation, he began his career in the national defense industry for Lockheed Martin. There, he performed research and development in military logistics and developed software for a satellite ground system. Aaron started with Walmart in 2014, where he has worked on mobile application development, enterprise master data management and retail analytics. In his current role, Aaron is the UI/UX lead developer for the next version of the Decision Support System, which is responsible for storing and delivering the data that drives Walmart's business decisions, as well as those of its suppliers.